Caught in a lie.  I said I wouldn't have any time for printmaking this month and yet I have been working on a new print.  I guess I'm just that driven but somewhere in between all my ridiculously long hours at work, I've managed to find a bit of time for my next print.


Not to say it hasn't been a crazy three weeks.  On the one hand there's the incredible rush of seeing three years of Olympic planning finally come to an end with Vancouver in the spotlight and positively charged with Olympic frenzy. On the other hand, the grueling hours I've had to work have thrown my nice calm life into chaos and I'm counting the days until the games are done.  My shifts alternate between seven in the morning to seven at night and seven at night to seven in the morning and I can't decide which is worse: getting up at 5:00 am or trying to survive the night shift.  Plus, I'm spending way too much time sitting in front of computer monitors and that just can't be healthy.
The one saving grace, if you can call it that, is that we're in a room with several giant TV screens so, since the start of the games anyway, we've been able to take in some of the events.  It's been absolutely fantastic to see Vancouver showcased like this and the world here for a visit.
I had the night off last night and we went downtown to catch some of the spirit.  We rode the new Canada Line, rode the fancy Olympic streetcar to Granville Island for coffee and rustic tarts, and checked out the Olympic flame and then wandered around for three hours. The streets were teeming with people, media and foreign visitors were everywhere, and the city was decked out in lights and funky light displays. I'd worked the graveyard shift the night before and was tired but you'd have to be dead not to feel a rush from the party atmosphere.  It was easy to feel proud to be Canadian and to live in this beautiful city.
Anyway, onto the print.  It's based on a friend's gorgeous photograph of the Skytrain bridge from New Westminster to Surrey.  Early morning.  My print is of the central portion of the image. I love the different shades in the sky but I'll confess, thinking about how I'd capture at least some of that in the print gave me the shakes.  I knew I'd have to print it as a gradation, no way out of it, and, never having done this before, I was really nervous.  Terrified maybe even.  Much to my surprise, the process actually turned out much less terrible than I'd thought it would be.  Yes, it was finicky and time consuming and even my big brayer wasn't big enough to cover the whole block and I ended up using three brayers to get the colour just the way I wanted it. 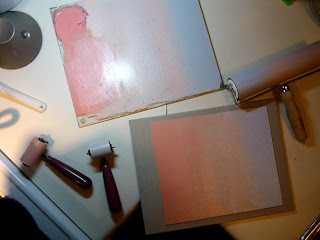 But boy, was I ever happy with the result! 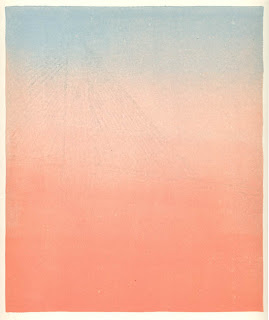 Today, one real day off before the gruel begins again, I added the next colour. So far so good.  I'm looking forward to the next one, whenever that will be.