Burning Down the House (Almost)

A week ago last Thursday, in the early afternoon, my parents left a pot on the stove and forgot about it.  Their kitchen filled with smoke and then their living room filled with smoke and at some point the smoke detector went off.  Only the night before they burnt a pot of wild rice (my father thought it was tea he was making) and set off the smoke alarm so you'd think they'd connect the shrieking sound to something burning.  But no.  They didn't.  The wild rice incident was already forgotten when they set the smoke alarm off for the second time in less than 24 hours and, because they didn't like the sound of it, my father just pulled it off the wall thinking problem solved.  Except, of course, it wasn't.


Fortunately, Roland was working from home that day.  He heard the alarm and caught a whiff of smoke coming up through the heat vents and he rushed  downstairs to investigate.  He found my parents sitting on the couch, the smoke alarm lying belly up on the cupboard, in a room so full of smoke you couldn't see the wall at the opposite end.  To his question "What's going on?" Roland got a puzzled answer: "Hmmm, I don't know, it's smoky yah?"  And that, of course, is enough to freak anybody out, even if you haven't already lived through a house fire once, as Roland has.  The issue isn't that they forgot a pot on the stove but that their automatic, instinctual reaction to a smoke alarm wasn't "WTF, something's burning" and was, instead, "oh this is an annoying thing, let's silence it".  We were lucky that day.


That night we disconnected my parents' stove.  By that point, while the remnants of smoky air still hovered in the room, neither of them remembered the afternoon incident, were incredulous when we told them about it, and suggested we were exaggerating.  The next day I called my mother's case worker and we arranged for home support.  Now, twice each week day, at lunchtime and dinnertime, a person comes to warm up my parents' meals. In the microwave.  Given that my dad's also become somewhat lax about food hygiene lately (I found some eggs with a "best before 2010" in their fridge), it's probably not a bad idea for someone to monitor what my parents are eating during the times we're not around. Sounds reasonable right?


Well, it hasn't been a smooth transition.  Each lunchtime, my father tells the person who comes around that he doesn't need them, that he can warm up soup in the microwave and make toast to go with it, and he tries to send them away.  My mother, in sharp contrast to my dad's less-than-welcoming approach, greets each person with unfeigned delight and treats them like a long-lost relative.  Then, each night after I get home from work my parents and I have the same conversation we've now had a dozen times, all about how they almost burned the house down, and about how a can of soup and some dry toast isn't all that nutritious and wouldn't it be nice if someone would make then a good salami and cheese sandwich to go with that soup, and how unless they accept the home support they'll have to stop living with us.  My father gives in, grudgingly, and the next day at lunch tells the support person that he doesn't need them and tries to send them away.  Sigh.  The case worker says there's a period of adjustment common to these situations and so that's where we're all at.  Adjusting.


And, in the midst of all this drama, my next relief print is hatching.  There is, among a number of mystical traditions, the belief that to name something is to give it power. So I already named this print and hope it will bring me some Grace.  With a capital G. 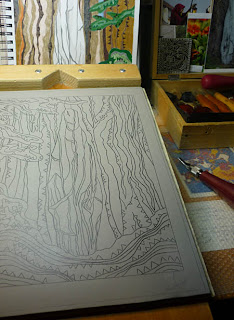 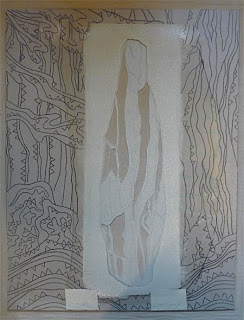 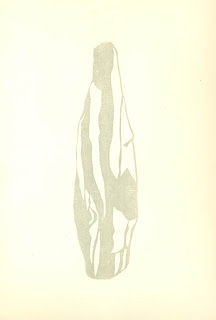